Medal of Honor: Frontline is a first-person shooter set in the European Theater of World War II. It is the fourth installment in the Medal of Honor series. Frontline developed and published by Electronic Arts, and was released for the Sony PlayStation 2 on May 28, 2002, and for the Nintendo GameCube and Microsoft Xbox on November 10, 2002. A remastered version was released on the PlayStation 3 on October 12, 2010, as part of the Tier One and Limited Edition of the new Medal of Honor (2010).

Medal Of Honor Frontline Wallpaper
Medal of Honor: Frontline has a wide range of German, American and British weapons. However, not all of the weapons in the game can be used . 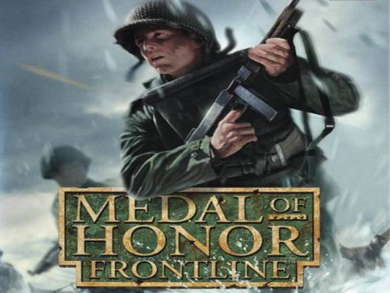 A returning character from previous games, James Patterson is the main character and protagonist of this campaign as well. He is a former C-47 Dakota pilot, now an agent of the OSS.

Hargrove is James's commanding officer. He briefs Patterson at the start of each mission and is most often the person who writes his instructional letters, though sometimes he is replaced by Fabrice Delacroix or Master Sergeant Kelso.

Sturmgeist is the head of a secret Nazi project regarding the use of a new flying wing technology. He is a ruthless commander and an excellent shot with the StG-44. He is Jimmy Patterson's nemesis.

An old friend of Jimmy's. He is a demolitions expert in the 82nd Airborne Division and an excellent shot with the M1 Garand. He knew Jimmy before the war, as they went to the same country club.

Gerritt is a Dutch Resistance Agent who has close ties with the OSS. He is an expert at both finding valuable information about the Nazis and at getting himself caught in the process.

Lt. Jimmy Patterson is an Agent of the OSS sent into Europe in 1944 to cause damage to the Axis Forces from behind enemy lines.

Jimmy states that The Allies will need every available soldier for Operation: Overlord. He joins up with the 2nd Ranger Battalion on board the USS Thomas Jefferson. Upon landing on Omaha Beach he is tasked with the destruction of both bunkers on the sea wall in order to allow the next wave to land. Jimmy and his captain survive D-Day.

A Storm In the Port

The OSS contacts Patterson. They say that a new U-boat is prowling the waters around France, U-4902. Given Jimmy's skill in disabling U-4901, they recommend him for the job. Patterson is airdropped into the bombed out village of St. Mathieu where he fights alongside The 101st Airborne Division. He stows away in a crate that is loaded onto U-4902. Inside the sub he plants demolition charges that go off when it reaches the port of Lorient. In Lorient, Jimmy causes a huge amount of damage to the supplies and materials that are in the warehouses, including several other U-boats. He comes across a Nazi officer, Rudolph Ulbricht Von Sturmgeist. He will come into play later.

Needle In A Haystack

A Dutch Resistance Member called Gerritt contacts The OSS claiming to have valuable intelligence. He is captured before he can be extracted, however. Jimmy is sent into Holland during Operation: Market Garden to try and find out where Gerritt is being held and extract him. He parachutes into the countryside where he meets up with Corporal Mike Barnes, Private Timothy Connor and Private 1st Class Jerry Langteau. They fight to the town entrance of Kleveburg. Jimmy waits until nightfall as Barnes and Langteau head off. In Kleveburg, he finds Dutch Resistance Operative Fox who brings him to an informant. The informant smuggles Jimmy to The Dorne Manor, where Gerritt is being held, and Patterson promptly rescues him.

Patterson remains in Holland. The information Gerritt had was on a new Nazi jet aircraft called The HO-IX. Its design could turn the tide of the war back to Germany's favor. Jimmy is sent to steal it. A member of The 82nd Airborne, Captain Tarver, brings him to Nijmegen Bridge. After heavy fighting, he makes it across. The Allied Army crosses with little to no effort the next morning. Jimmy takes a medical supplies truck away from the bridge to the occupied town of Arnhem. A British Paratrooper takes the truck as Jimmy escorts him through the city and to the bombed out section. Here, he meets Master Sergeant Kelso and they fight together trying to reach a customs house where Dutch Resistance Contact, Jigs, is located.

Jimmy manages to get into the outlying warehouses of Gotha. He fights through many members of both the Luftwaffe and the Heer. After a speedy run through a seemingly abandoned mine shaft he comes across The HO-IX being towed inside a hangar. He destroys some radar stations before making a run for the hangar. After a seemingly endless tide of German soldiers defeated, Patterson kills Sturmgeist and steals The HO-IX, escaping only seconds before The Allies start bombing the facility.

Medal of Honor: Frontline, in keeping with traditional FPS values, also included distinct cheat codes, which could unlock entire missions for play without having to complete them firsthand, or other codes for easing gameplay or simply additions to take some of the darker elements of the game out and lighthearted gags.

The PlayStation 3 version of Medal of Honor (2010) features an improved version of Frontline. It has improved graphical quality and resolution, in addition to some new features such as usable ironsights and 46 trophies (44 normal and 2 hidden), but it will otherwise remain the same as the original version. It was initially only available with Medal of Honor (2010), but was later released as a downloadable for 15 USD on the PlayStation Network Store.