Medal of Honor: European Assault is the 8th installment in the long running Medal of Honor series. European Assault was released for PlayStation 2, GameCube, and Xbox in June 2005. The game's story was written by John Milius, the writer of Apocalypse Now. The plot is based on Lieutenant William Holt, an operative in the Office of Strategic Services, and follows his deployments to allied forces in France, North Africa, the Soviet Union and Belgium. 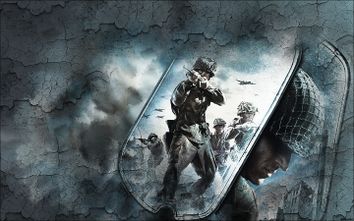 The gameplay of European Assault is essentially the same as of its predecessor, a first-person shooter; however, the weapons and interface have been slightly upgraded to be more player-friendly. Most notably the HUD has been upgraded to indicate primary and secondary target and show other squad members, as well as the weapons now have usable ironsights. The addition of Adrenaline Mode, activated by killing numerous enemies or scoring headshots, allows the player to be invincible and have unlimited ammo for a short period of time. As with all Medal of Honor games, the player is presented with a wide variety of weapons and stages pertaining to World War II. There are many guides by gaming companies and sites as well as by fans.

There are four overall areas the player (as Lt. William Holt.) will be sent to: France, North Africa, the Soviet Union and Belgium. Each area has a set of missions for the player to complete. While some objectives will be detailed from the start, exploration of the area will cause Holt to discover more missions. Each mission consists of five elements: a primary objective, secondary objectives, killing a German officer (Nemesis battle in the game), obtaining documents from the officer and escaping. If all are completed, a gold medallion will be given. Missing one or two will gain a silver or bronze.

Most missions involve Holt fighting alongside allied NPCs and working towards a common objective, often based on historical events during WWII. However, as a member of the OSS, Holt also has secondary objectives for each level, including finding documents and eliminating important German officers, henchmen belonging to the antagonist Graf Von Schrader.

In the beginning of the game, in a wholly fictionalized storyline based on Operation Chariot as no Americans took part in the original raid, Holt and the British force are heading to the vital submarine pens at St. Nazaire. They approach the Nazi Germany held port in the HMS Campbeltown. However, the ship begins to take fire and soon raises the British Union Flag after they lose their cover. Upon landing, Holt is told to meet an officer that has the only radio after their radio officer is killed, at another side of the dock, which is denoted by a green flare. Upon meeting the officer, Holt has to head back to the ship to take cover from the airstrike the officer called, thus finishing the first mission. Then Holt goes with the British commandos on the St. Nazaire Raid, where he destroys a fuel tank and eliminates a German officer named Klaus Mueller. Holt also has the option to destroy an AA cannon, and a shore gun. Holt later travels through the docks in order to destroy an electric power plant and a U-boat, shutting off power to the city and eliminating another German officer by the name of Horst Brenner. Early the next morning, Holt and his British comrades receive word that no reinforcements will be coming, forcing them to fight their way through two German Panzers. They must battle officer Erich Koster and his forces throughout the city to escape into the French countryside.

Mission 1 in North Africa is to destroy Tiger tank prototypes. One of Holt's optional targets is a Nazi officer named Adabold Brecht. Optional objectives include blowing up a radar dish and destroying a panzer inside a destroyed village. After initial fighting, Holt makes his way inside a German compound and attempts to rescue captured SAS commandos and kill another of Von Schrader's men, Hans Schneider. With their help, Holt manages to get his hands on film which was recorded by Von Schrader, and ends up destroying a prototype V2 rocket

There are 2 missions in the Soviet Union. The first mission is On the Road to Stalingrad. Holt's main objective is to destroy a rail gun on the other side of a river that runs through a small town. Holt also has an option to destroy 3 Panzer Tanks. The final part of the mission is to secure and then defend a fortified Church on the edge of town, and eliminate Walter Neumann. The second, and final, Soviet mission is Climbing Mamayev Hill. Holt, along with his squad and a Soviet battalion, lead a charge through a small village, driving the Germans back across a river. Holt must then follow them across the river and signal a rocket strike to clear the path. Once the area is secure, Holt's allies set themselves up around the entrance to a fort, on top of the hill. Once Holt blows the doors open, there is a fierce firefight. After destroying three artillery guns, Holt must eliminate Franz Greubner, and then Transmit Virus House Intel to the OSS (the Main Objective), before finally destroying the documents.

The final mission of the game involves the Battle of the Bulge. Holt is sent in with the 101st Airborne Division, surrounded within the Ardennes forest in Belgium and participates in the battle to liberate the Bastogne Pocket. The Mission starts with an intense German offensive. Holt, with the help of paratroopers from the 101st Airborne manages to stop the initial assault by killing Folker Kappelhorf and blows up a strategically important bridge. Then Holt is sent to a Belgian farm to rescue Manon Batiste, a female OSS operative and the main character of Medal of Honor: Underground (although renamed to Manon Du Champs in European Assault), who was captured by Von Schrader's most loyal man, Freder Engel. After defeating Engel, Holt frees the operative. In the final mission, Holt, with assistance from US tanks and soldiers, makes the critical assault on Von Schrader's Virus House. With one final near-cataclysmic battle, Holt eliminates Von Schrader and destroys the dirty bomb he developed by dropping it into the underground bunker at the last moment and survives with some minor wounds. After exiting the ruined bunker, Holt meets an OSS officer, who gives him a set of Top Secret orders about the push of Von virus house.

The multiplayer in this game is splitscreen only. The players decide if they want to be Allies or Axis, what game mode (including team deathmatch), as well as what map they will play on. Each faction has several different skins and classes. The classes are: Infantry, Heavy Weapons, Rifleman, and Sniper. Each class has its own weapons and abilities. Players can also upgrade their weapon or pick up a bazooka, each of which are hidden somewhere on every map.

The game received average to good reviews, with many rating it as high as the previous Medal of Honor game, Pacific Assault. It was praised by several gaming websites and magazines like X-Play, IGN and Nintendo Power for its realistic battle situations and historic accuracy. However, critics criticized the game for the less attractive graphics engine than the previous Medal of Honor title, and lack of online multiplayer.

All in all, the game has Metacritic scores of 73 for PlayStation 2, 72 for Xbox and 71 for GameCube.